’s our story about what makes us tick, about where our hearts are, of how we want to work, it’s the story of what we’re proud of but it’s also the story about some of the half-shameful insights of realizing we were so wrong about a few things that we had to overcome quite a few obstacles.

But first, just a few lines on what we do.

We strive for what we call:

With a ”sales-less deal” we mean that a customer will always feel that she’s in charge and deciding about a buy rather than feeling that she has been sold something.

In general, it has to do with making people convinced to take any action, or to learn something over time, but specifically, an action that is often wanted is a purchase decision why we often just plainly talk about selling scenarios.

Our vision comes across in what we do for a living, since the most important thing we do to achieve our vision is to help businesses, large and small, to automate their sales. 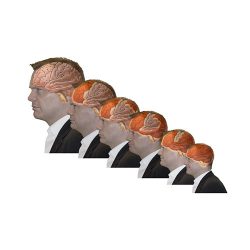 We have been able to do this with a successful method we first called:

It’s all about simple psychology to get the potential client from a state of skepticism to being a delighted customer by ”connecting dots” in the brain.

The method is based on research in memory psychology and pedagogy around the psychological process to bring clarity about something to the point that the listener is prepared to perform an action. It emphasizes both the importance of repetition and that it is rarely possible to be convinced of anything unless you have learnt about it gradually.

The process works in all cases whenever you want to give someone a chance to become convinced about something, and it can be done with no specific tool at all. However, there are things that can be automated to save its user a lot of time, and we do sell a tool for doing this.

This is what we help businesses with to earn a living.

This is the story of how the Sales on Autopilot process and Otto came to be and what is important to us.

Ultimately, we chose to try to get our passion boiled down into a couple of words that we can truly call:

…and we chose the play-button as our logo since we thought it symbolizes all three.

We are also willing to plant seeds we believe in even though we may not be able to harvest their fruits in a long time.

Sometimes it’s easier to say what we are trying to accomplish by saying what we won’t do. We will never:

The personality of all of us Cnverts really enjoy helping others in general, and job-wise to interact with our clients and by providing them with the very best possible service where we really assume responsibility. To give such service, and to really enjoy doing this, is really what we read into Salesmanship, and from that perspective, we’re very proud to call ourselves Salesmen.

We believe that this is the whole difference that will make the customer come buy rather than anyone having to sell anything if taken to its extreme, and that’s also why the vision of Cnvert is to reach for a ”Sales-less deal”. We believe that if we think of a sales scenario more like as if it’s a ”buy” from a client rather than a ”sale” of ours, then ultimately we’ll have more satisfied clients. If also our clients will look at their customers in the same way, we also believe our clients’ customers will feel more satisfied which we ultimately believe will make our clients more money, and the world a little better place to be.

We are also firm believers in not just making things right, but often even more important in making sure we make the right things. This make us passionate in thinking twice about whether we can do something just a little bit more efficiently already the first time we do it. If we’re forward-looking enough, perhaps we can automate it completely?

This also mean that even though we believe we have included a wealth of power into the tool Otto that we have developed and sell, the system itself will always be continually developed to include even more.

A history of Trial and Error.

When it comes to Sales, and the reason Cnvert concentrates on Marketing Automation is because the Cnvert founder Henrik Rudberg once confused what the major benefit of a service was. He believed that a low price was the main driver for new customers so he charged too little for the services of the IP-telephony and Mobile Service Provider Cellip (which Henrik is the founder of as well). He quite foolishly thought that good quality, innovative services and low prices would make those phone subscriptions sell themselves.

He was quite frustrated seeing 99 out of 100 visitors to the web-site not even care to say ”Hi”, and he was afraid they did not understand how good those services really were despite, or due to, the most competitive price available on the market.

As a result of the low prices and the only small margin that came with it, he couldn’t afford to hire enough sales guys to go tell the market, either.

He realized he needed a way to get the users to WANT to have a sales guy come knocking at their doors more often (at least figuratively speaking as he certainly couldn’t afford to do anymore than send them an e-mail at most).

He dug deep into the theories in psychological selling in order to figure out what to do at what time, and spent much time thinking about how each step could be automated as much as possible.

After quite a bit of thinking, he realized he needed a way to be able to SCHEDULE the communication in time, relative the first contact with a user.

According to the forgetting curve of mind-researcher Hermann Ebbinghaus, it clearly was vital to repeat the communication multiple times, as the brain would only retain about 56% of the information presented to it after an hours time and 20% after a month.

Its cost efficiency made E-MAIL MESSAGES be the communication means of choice, and the user had to be given a really good reason to actually ask for those messages, as there’s otherwise no psychological way to turn an unwanted message into a wanted one.

So he asked the user’s permission (and their names and e-mail-addresses) by providing an IP-telephony study course via 5 e-mails (one per day for five days) with a title saying something like:

This DID make the whole difference.

Now, 20 out of 100 left their e-mail address. And now 3 (instead of 1) had bought the service within the first five days, and within the first six months, 6-7 of them had also purchased after a follow-up monthly newsletter.

In total, an exponential growth was started which multiplied business by MORE THAN 10x due to a factor he hadn’t thought of before. Although he knew that the key to make any business profitable, is to maximize all three factors of:

We refer to this as our 3 C formula (for short):

[Contacts x Conversion x Customer Retention]
So what was the unforeseen factor?

Interestingly, by getting three (3) purchases instead of just one (1) didn’t just mean that the conversion increase was three-fold (3:1). In addition, it also meant that the cost of acquiring a contact (a web-site visitor in this case) plunged to a third (1/3).

It gave a positive spiraling effect he hadn’t anticipated: He could now also start to pay three times more than previously in order to get one new contact, and this led to many more customers than just the 3-7 time increase in conversion alone, and it paved the way for Cellip to become (by now) second to the Market Leader in IP-telephony solutions for businesses in Sweden.

Later on, it turned out it worked with similar conversion increases also in cold calling, and for following up on meetings or events.

We then also realized that the whole thought process very much mimics the way in which also million-dollar deals are made, so the sales process itself is not very different if you compare different business to business sales.

Playfulness & having fun >> Start of Cnvert

Seeing the positive effect, our passion grew to get the new Sales Methodology out to ALL other businesses. If it works in the Super-Competitive telecommunications industry where you would think Sales Managers already would have turned every stone to find the most effective sales process, it should work in others. There must be millions of companies in the need of something similar and we really want to help them, too!

Our founder thought the name Cnvert to have a good rhyme with much as what we see ourselves as: Diagnosticians, Technicians, and something of Sales-Magicians.

Lastly, but really most important: It’s really fun and gratifying to help so many others! After all, having fun is key to stay passionate about anything, and luckily it works both ways: Passion makes fun!

Speaking about names, the name of our most important product, Otto® came about just because someone thought an Autopilot should be called Otto if anything. Apparently, we weren’t the only ones thinking it, since Paramount pictures also has an Autopilot called Otto in the comedy ”Airplane!”. Well, that movie was really fun, so it still fits well with our third value, too! 🙂

We sent in the application for a registered trademark more on fun than anything else, while Otto was still just the project-name. We knew there are other trademarks called Otto, although none in our field, and we provided to be right, a year later, the registered trademark Otto® was ours!

About the company Cnvert (and not Sonican that some have believed)

Cnvert Sweden AB is a privately held Swedish company with staffing in India, Sweden and Ukraine.

This is the Cnvert story so far. It will not be finished anytime soon

If you want to know more about ”Marketing Automation”, check out our 2-min-test!